September is the month of Our Lady of Sorrows, whose feast was celebrated on the 15th of this month, the day after the Feast of the Exaltation of the Holy Cross. Mother Mary, the first disciple of Christ from the moment He was incarnated in her womb, is the pre-eminent example of compassion, the ability to suffer with another person. Her Immaculate Heart was pierced by the sharp sword of sorrow as she watched her only son, her beloved God, suffer and die on Calvary.

Venerable Archbishop Fulton Sheen wrote in Calvary and the Mass:

“Have you ever remarked that practically every traditional representation of the Crucifixion always pictures Magdalene on her knees at the foot of the crucifix? But you have never yet seen an image of the Blessed Mother prostrate. John was there and he tells in his Gospel that she stood. He saw her stand. But why did she stand? She stood to be of service to us. She stood to be our minister, our Mother.

If Mary could have prostrated herself at that moment as Magdalene did, if she could have only wept, her sorrow would have had an outlet. The sorrow that cries is never the sorrow that breaks the heart. It is the heart that can find no outlet in the fountain of tears which cracks; it is the heart that cannot have an emotional break-down that breaks. And all that sorrow was part of our purchase price paid by our Co-Redemptrix, Mary the Mother of God!”

Today is the feast of St Vincent de Paul, a saint who also exemplifies compassion, known for his charitable works. Vincent’s father paid for his education by selling the family’s oxen. His father believed that a good ecclesiastical career would enable Vincent to be financially independent and help support his family.

Educated by Franciscan friars in France, the young Fr de Paul was captured by pirates and sold into slavery (like St Patrick). His third owner had forsaken Catholicism, but Fr de Paul brought him back to the faith; they fled by night over the sea to France, from whence Fr de Paul accompanied a cardinal to Rome. From there, in 1609 Fr de Paul was chosen to go on a secret mission to the court of Henry IV, King of France. That’s when he met Queen Marguerite and became her almoner, that is, a chaplain who is in charge of distributing money to the poor.

In 1617, Fr de Paul established confraternities of charity for the spiritual and physical relief of the poor and sick of each parish. From these, with the help of St. Louise de Marillac, came the Daughters of Charity, “whose convent is the sickroom, whose chapel is the parish church, whose cloister is the streets of the city.”

“It is not sufficient for me to love God if I do not love my neighbour. I belong to God and to the poor. God loves the poor, and consequently He loves those who have an affection for the poor. For when we love anyone very much, we also love his friends.”

The Daughters of Charity were long renowned for their work in orphanages, homes for the aged, and hospitals. They were the first active Order created for women and their particular style of dress reflected the clothes worn by peasant women in St. Vincent’s native Normandy. Yet their most important contribution, perhaps, is the fact that they were among the first professional nurses. Until Florence Nightingale came around with the Red Cross, nursing was strictly an occupation that was left to women religious and others who could share in their work. In this, the Daughters of Charity were truly pioneers. 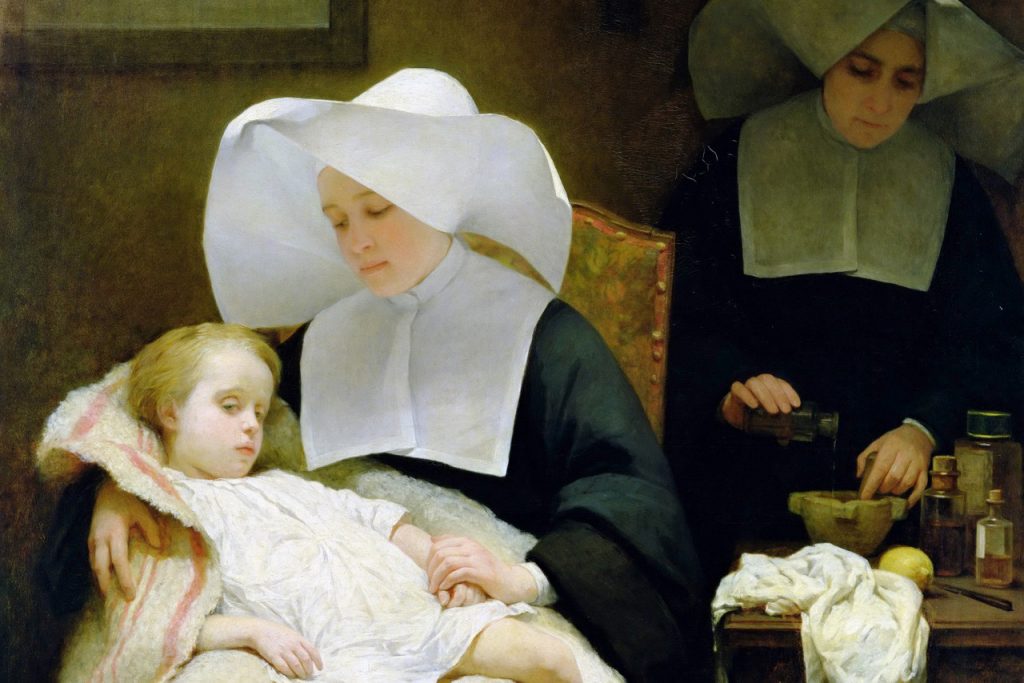 Here is a description of them:

The Daughter of Charity is one of the sights of Paris, the city of her birth. She is more omnipresent than the gendarme. In her billowing blue gown and white headdress she walks the boulevards, the back streets, the alleys. She descends into the depths of the metro and climbs to the heights of the garret.

She is never without the huge market basket slung over one arm, and packed with the foods and medicines of her trade, nor the black cotton protect her starched white linen from the sudden rain. She moves ceaselessly, silently, seemingly unaware of the bustle and roar about her, seeking her quarry; and her quarry is always the same: the poor, the hungry poor, the sick poor, the evil poor – but always poor.

Her convent is the house of the sick, her cell the chamber of suffering, her chapel the parish church, her cloister the streets of the city or the wards of the hospital; obedience is her enclosure, the fear of God her grate, and modesty her veil.

May we learn from St Vincent de Paul and his Daughters of Charity to be truly compassionate disciples of Christ, bearing love for every person. As the hymn to his compatriot Father Nicholas Barré says:

“Touch many hearts to follow in your footsteps
To dedicate their lives to youth and poor
Drawn by the Lord to make Christ known and loved
Fill us with zeal, humility and faith
Pure love and strength and courage without fear
To keep your spirit alive in our hearts.”

Such compassion is the fruit of a truly Catholic education.