This year’s Commencement of School Year (COSY) Mass was held at the Cathedral of the Good Shepherd on Sunday 31 January, the feast of the wise and loving educator St John Bosco. This followed the December 29 Appointment and Appreciations Ceremony for Principals by the Ministry of Education, where forty-three new principals received their letters of appointment during the Ministry’s annual reshuffle exercise.

Archbishop William Goh commissioned eleven newly appointed Principals of Catholic schools and preschools, instructing them to “be the light of truth, justice, freedom and love to all.” Eight newly appointed Vice-Principals were also presented to the congregation, comprised of more than a hundred educators, Sponsoring Authorities and members of the education fraternity. 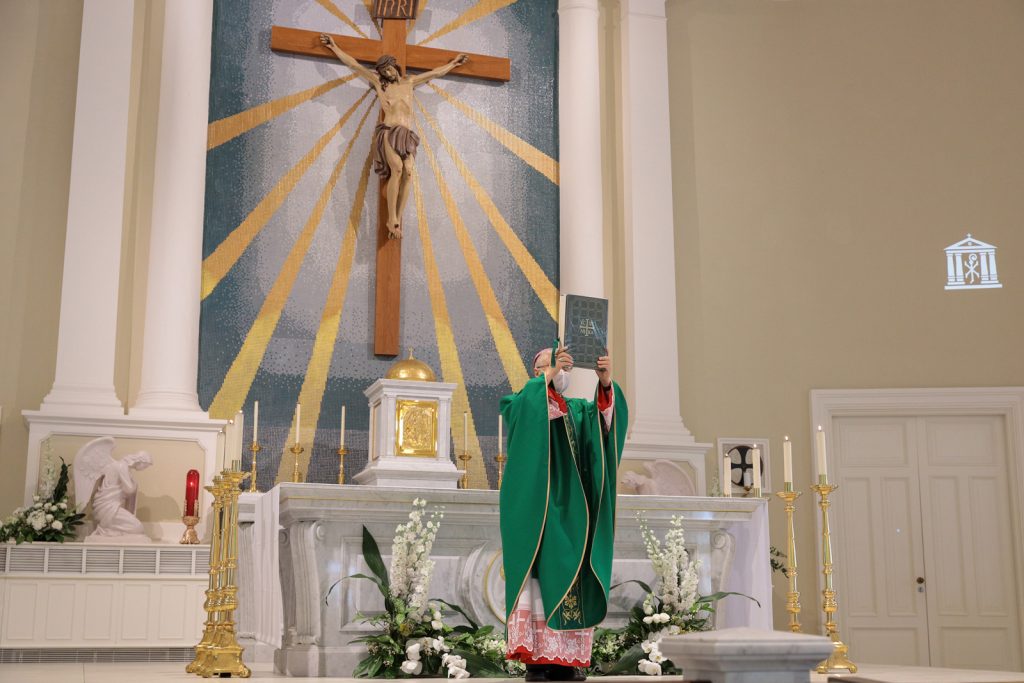 In his homily, Archbishop Goh encouraged school leaders and educators to lead like Moses and Jesus, with a personal authority based on firm belief in their vocation, manifested in being truly present to their staff and students, providing genuine care and hope to everyone around them. “As educators, all of us are called to be leaders, not just in imparting knowledge, but to be educators of life, of love and of truth,” he contended.

His Grace contrasted the transformative power of personal authority with the hollowness of mere juridical authority, based solely on the position held by a person, or professional authority, from one’s paper qualifications. He emphasised that true authority is required “to form people and to get things done.”

Archbishop Goh pointed out that a Catholic school is not one which simply teaches academic subjects with an optional extra subject of religion. Rather, he declared, “If a teacher is imbued with the Gospel and convinced that what he is teaching has great importance in the lives of our students and the future generation, he would, in a very subtle or unconscious way, inject the values of the Gospel, his convictions, her convictions, into what he or she is teaching.” 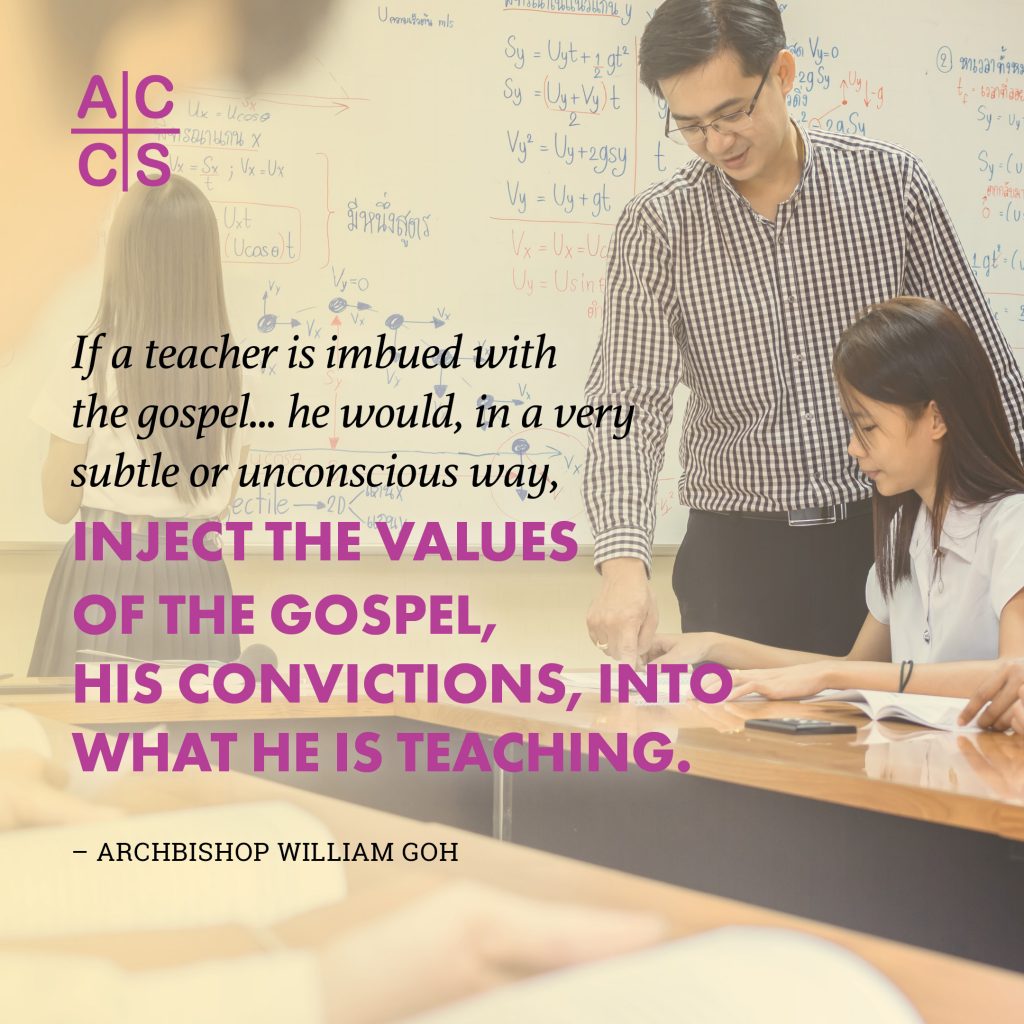 His Grace spoke of the importance of teaching with passion and conviction, providing a consistent, inspiring example to students by “walking the talk”. He asserted: “If you are focused on the Lord and you are focused on your vocation, I can assure you you’ll be the greatest educator and your life will impact the lives of everyone, including your fellow teachers.”

Together, the educators pledged in the Prayer of Commitment to instil Gospel values in their schools, that they may be “places of justice and integrity, gentleness and compassion”. They prayed for God to fill their hearts “with compassion for those on the margins of life”, and that their “leadership in Catholic Education may bring forth [God’s] kingdom of love”. The Principals received a lighted candle with the words “Called to Serve”, a symbol of their call to be the light of Christ to their respective schools.

Echoing the Archbishop’s sentiments, various Principals shared their holistic vision with Catholic News. Timothy Goh of St Stephen’s School said, “My hope and dream for the school is to have the boys… become men of integrity and men for others.” Valerie Pinto of CHIJ St Joseph’s Convent stated that she wants to “grow a more close-knit Christ-centred school community” with staff and stakeholders. Shawn Lim of St Gabriel’s Secondary School aims to form “servant leaders, ever ready to lead and serve the community and make a difference to the lives of people around them.” 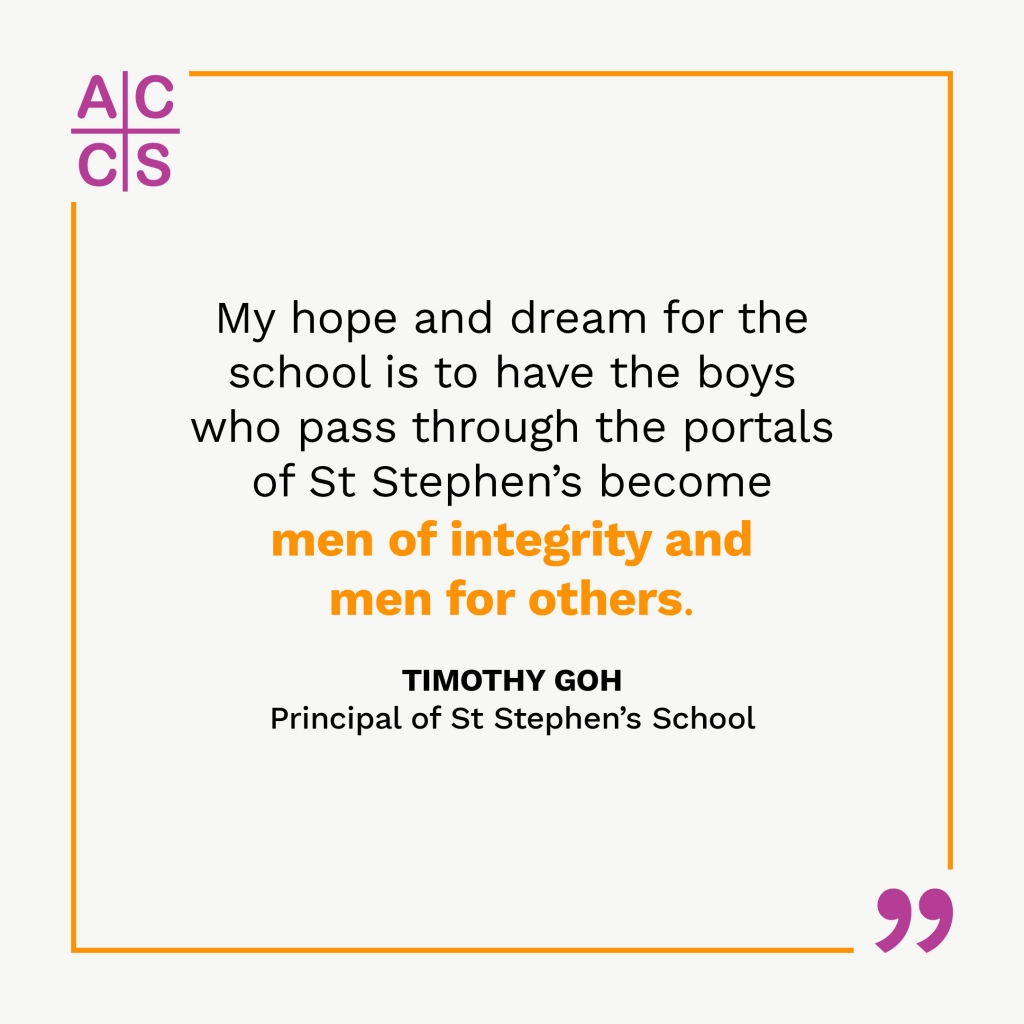 Eric Leong of St Joseph’s Institution (SJI) Junior explained, “Education is not just a process of giving knowledge, but a lifelong process which creates an understanding of moral and ethical values to guide one’s life in the right path.” Stephen Chin of Assumption Pathway School quoted their founder, St Louis Marie de Montfort: “Those whom the world rejects, should move you the most.” He expressed his confidence in his students’ ability to succeed in life despite all challenges.

At the end of the Mass organised by the Archdiocesan Commission for Catholic Schools (ACCS) and the Council of Catholic School Principals, Archbishop Goh thanked two retiring Principals for their lifelong service. One of them, non-Catholic Principal Liu Seok Noi of CHIJ Our Lady of the Nativity (2003-2009) and Holy Innocents’ Primary School (2010-2020), reflected: “Catholic schools have always been well-known for their character formation. I was very blessed… to help each and every child grow to their fullest potential.”

Principal Magdalene Chin, who served in three different CHIJ primary schools (Katong, Toa Payoh and Kellock convents), along with Temasek Primary, mused: “[O]ne word encapsulates this journey – passion! … When we, as a school community, are passionate about teaching our children to walk as children of light… when we can be the light of Christ to all by the way we passionately use our gifts for the glory of God, then the journey of serving as a Catholic educator keeps us alive and helps us and others grow in faith and hope too.”

Archbishop Goh exhorted everyone to uphold the legacy of their schools’ founders, especially during this Catholic200SG year, commemorating the significant contributions of mission schools and other Catholic institutions in forming Singapore over the past two centuries.