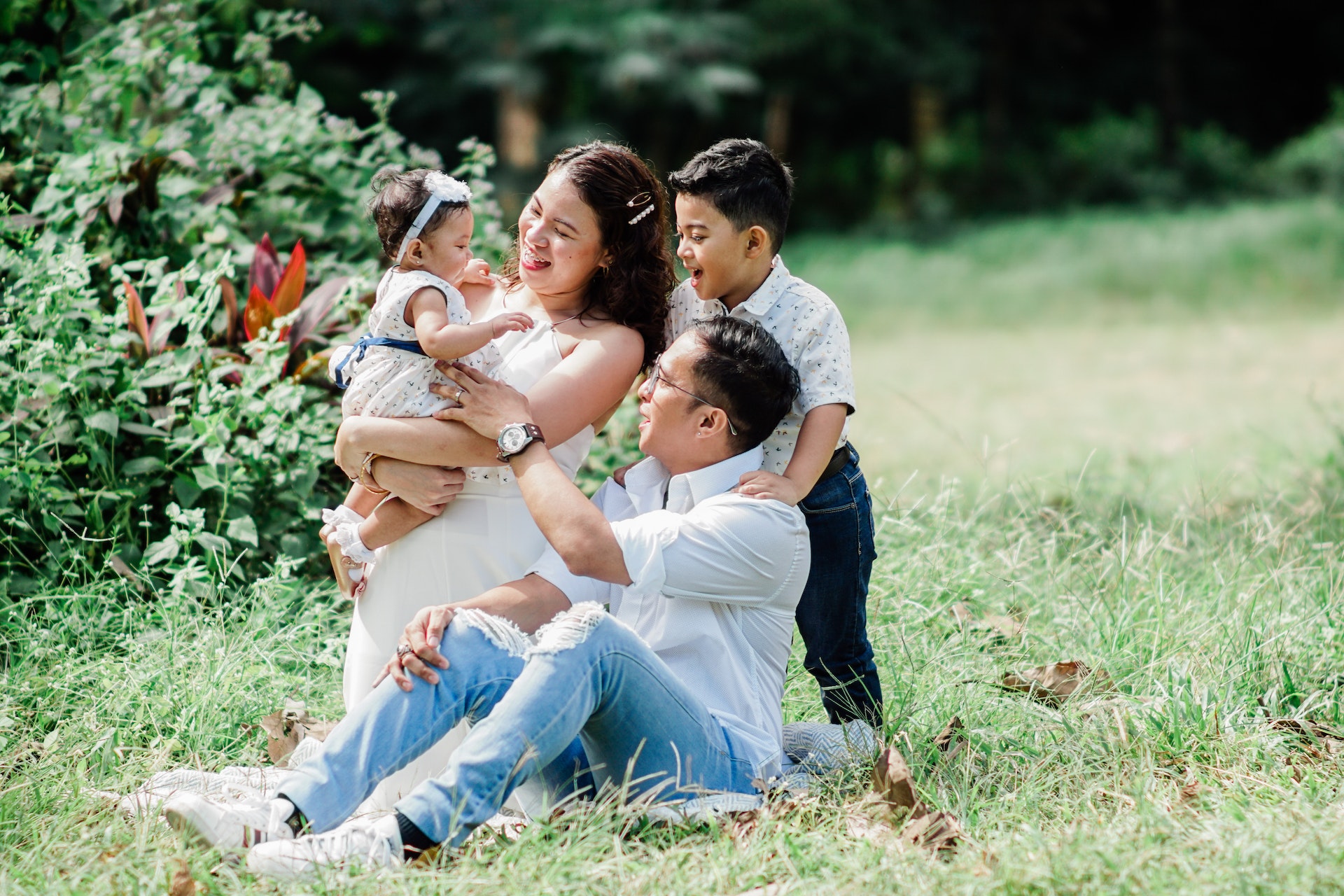 At the end of this study, CFL aims to create resources that guide families to focus and build on their strengths. These family-based resources and videos may be distributed through Catholic schools, catering for different life stages and possible transitions. They will also aid in the delivery of programmes to develop stronger children, parents, families and communities.

The survey, which is in English, takes about 15-20 minutes to complete. Respondents sought must be at least 21 years old, Singaporean citizens or permanent residents, and may include dating or engaged couples, married couples, as well as single-again individuals. 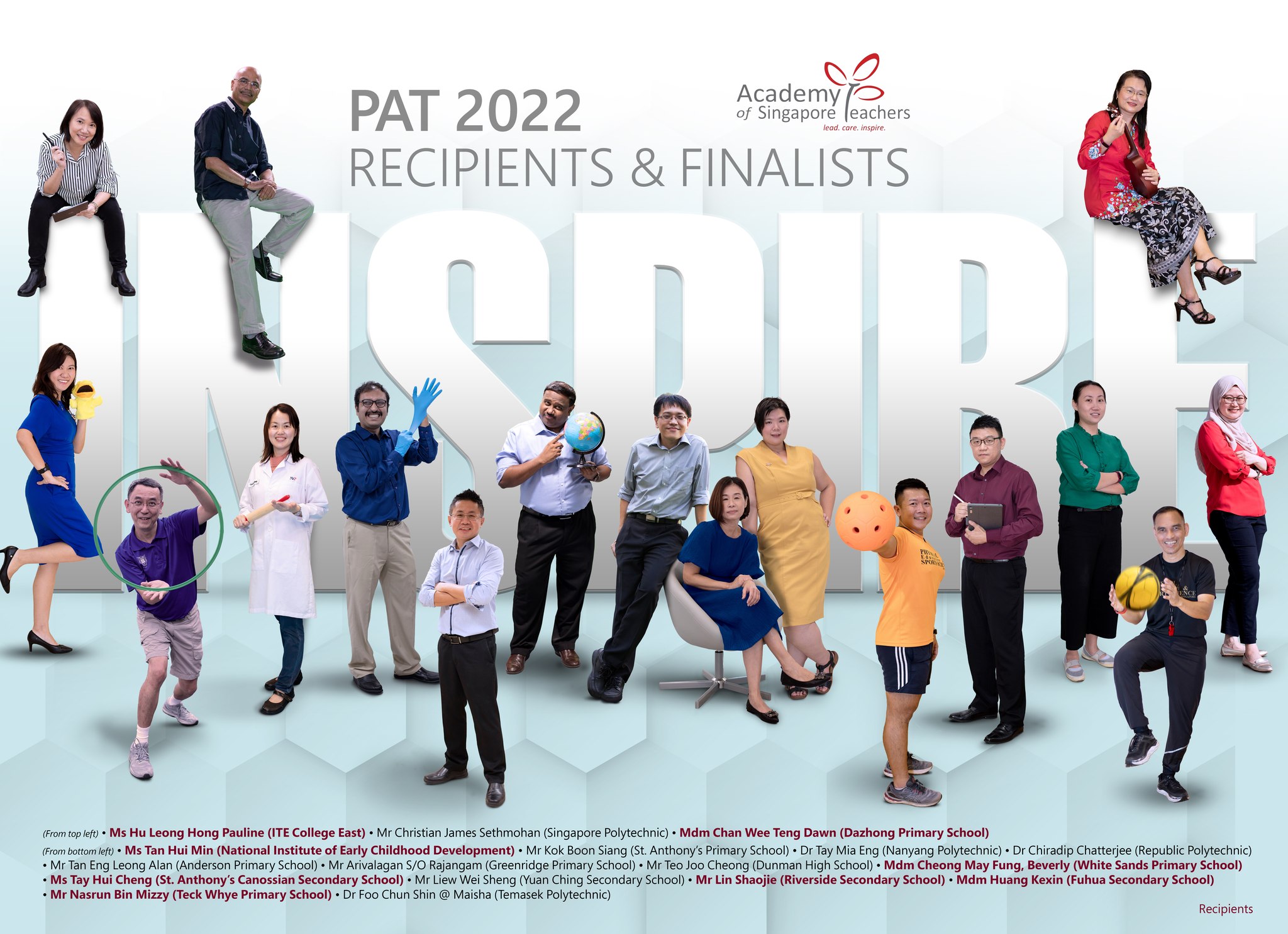 In her speech at the award ceremony in the Istana on Teacher’s Day, 1 September 2022, President Halimah Yacob said: “Our educators do more than teach subjects. Beyond the pursuit of excellence in academics, they also focus on the socio-emotional and mental resilience foundations for our students, and help to positively mould their habits, traits, and character. These will enable each and every student to grow holistically and achieve their fullest potential.

“The recipients of this year’s President’s Award for Teachers exemplify the qualities of what we mean when we say teaching is a calling, and the huge impact teachers can have in the lives of their students. I extend my heartiest congratulations to all the eight award winners, as well as the 4000-over nominees. All of you have been an inspiration to your fellow teachers.”

Ms Tay developed a mobile game and videos to assist her students in their Chinese lessons during the pandemic. She averred: “This honour is thanks to the support of my school leaders and colleagues who believe in me and work alongside me to turn ideas into viable teaching and learning innovations. I have been teaching for almost 18 years and I find my work rewarding and meaningful as I have the opportunity to impact young lives.”

The Ministry of Education (MOE) states: “The President’s Award for Teachers was established in 1998 to recognise excellent educators for their role in moulding the future of our nation.”

“They constantly adopt innovative approaches in their lessons, and are lifelong learners and mentors to their peers. They reach out to their students, affirm their strengths and efforts, and encourage them to pursue their dreams. Through their words and deeds, these educators are an inspiration to their students and colleagues.”

MOE elaborated: “This year’s recipients were selected from 17 finalists who were judged by a panel chaired by Mr Patrick Tay, Chairperson of the Government Parliamentary Committee for Education. The panel included representatives from the Ministry of Education (MOE), as well as the Community and Parents in Support of Schools (COMPASS), a council established in December 1998 to advise MOE on strengthening and promoting school-home-community collaboration.

Ms Tay Hui Cheng is the Head of Department for Mother Tongue at SACSS and Mr Kok Boon Siang is the Year Head for Lower Primary in SAPS. 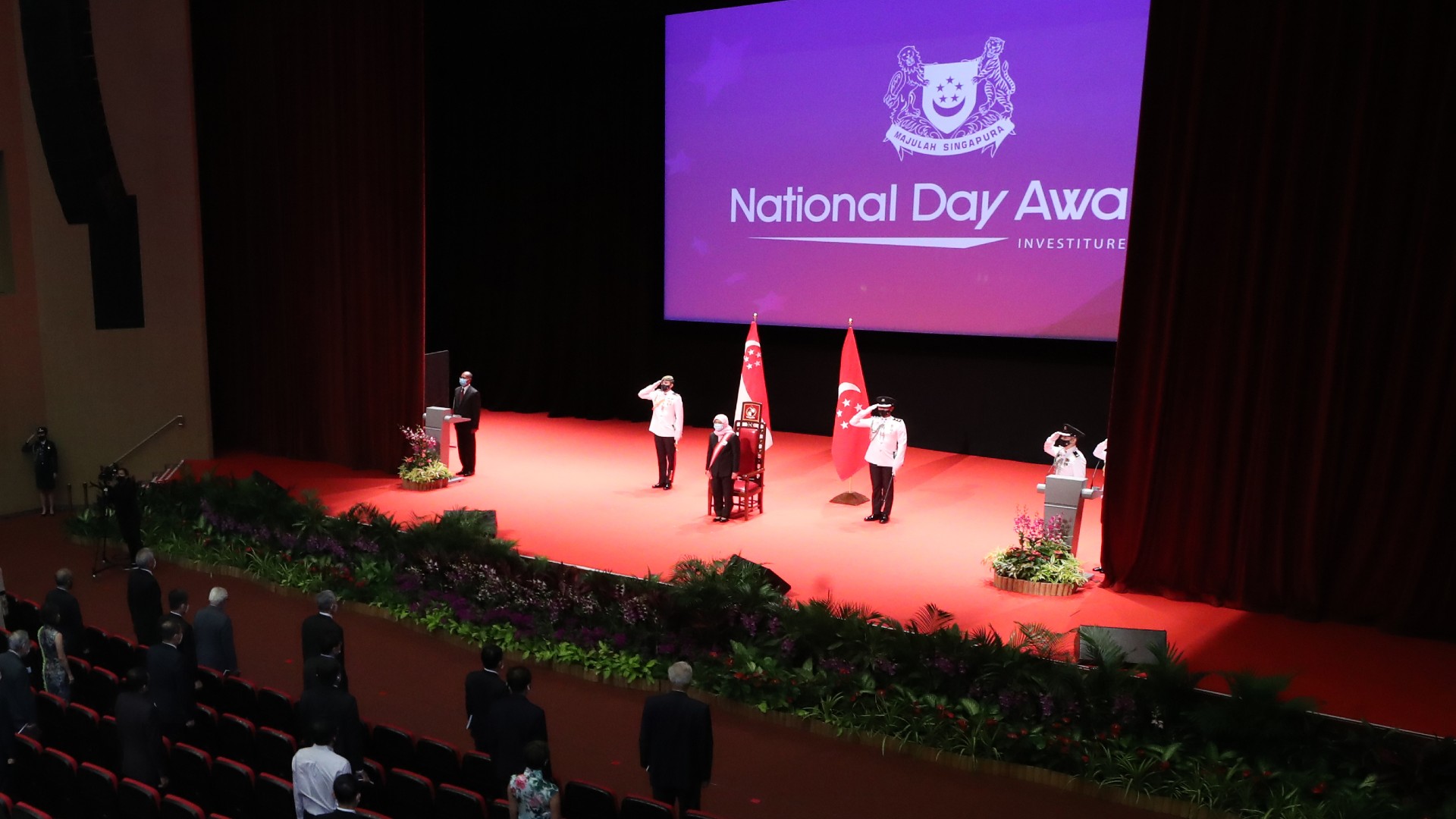 In recent weeks, various teachers and alumni from Catholic schools throughout Singapore have been recognised with national awards.

Ms Tan Shu Tian (HOD Education Technology) of St Anthony’s Primary School was one of six teachers who received the Outstanding Youth in Education Award (OYEA) 2022. MOE explains: “The OYEA is a national award that recognises and honours the achievements of young educators who have shown admirable passion for teaching, and commitment to inspiring and nurturing their students. Launched in 1999, it seeks to recognise excellent younger teachers for their youthful idealism, enthusiasm, energy and active involvement in the development of youth beyond the formal curriculum.” 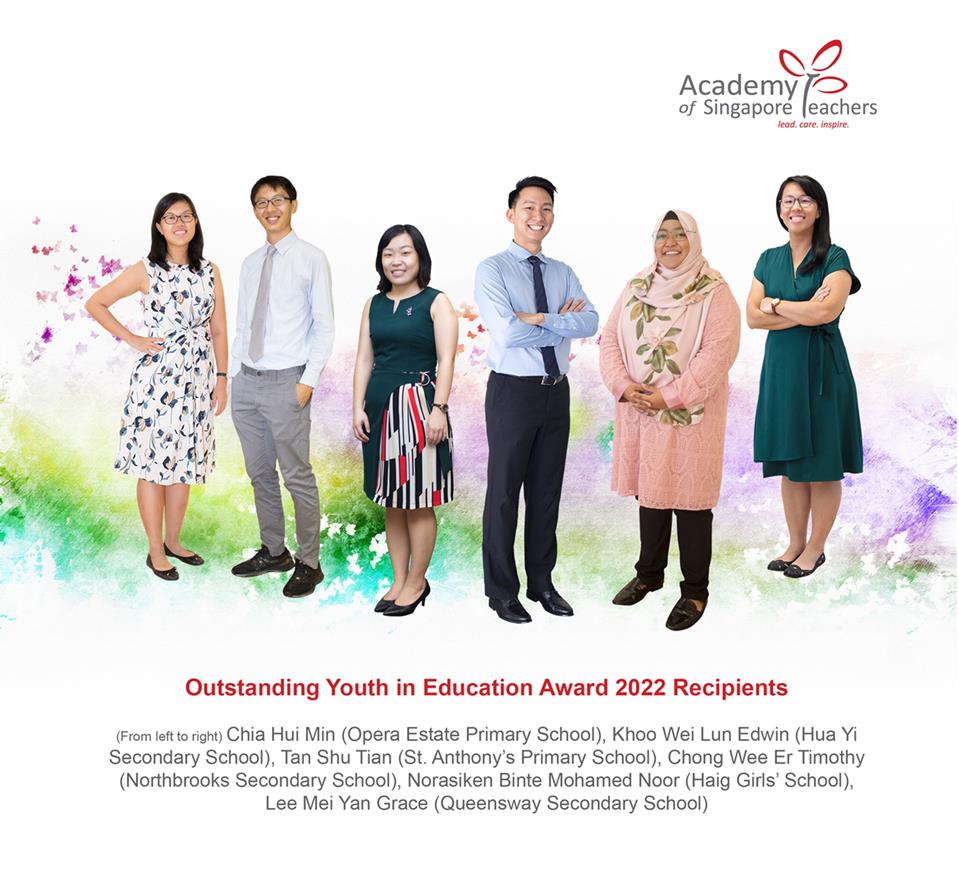 CJC Principal Mrs Phyllis Lim said, “We are grateful for the many years of dedicated service and contributions by our staff, members of the CJ School Management Committee (SMC) and CJ alumni and we thank God for their continued service to the college, community and the nation.”

Do you know of more educators, support staff or alumni from your school who were recognised on National Day? Let us know if you do! 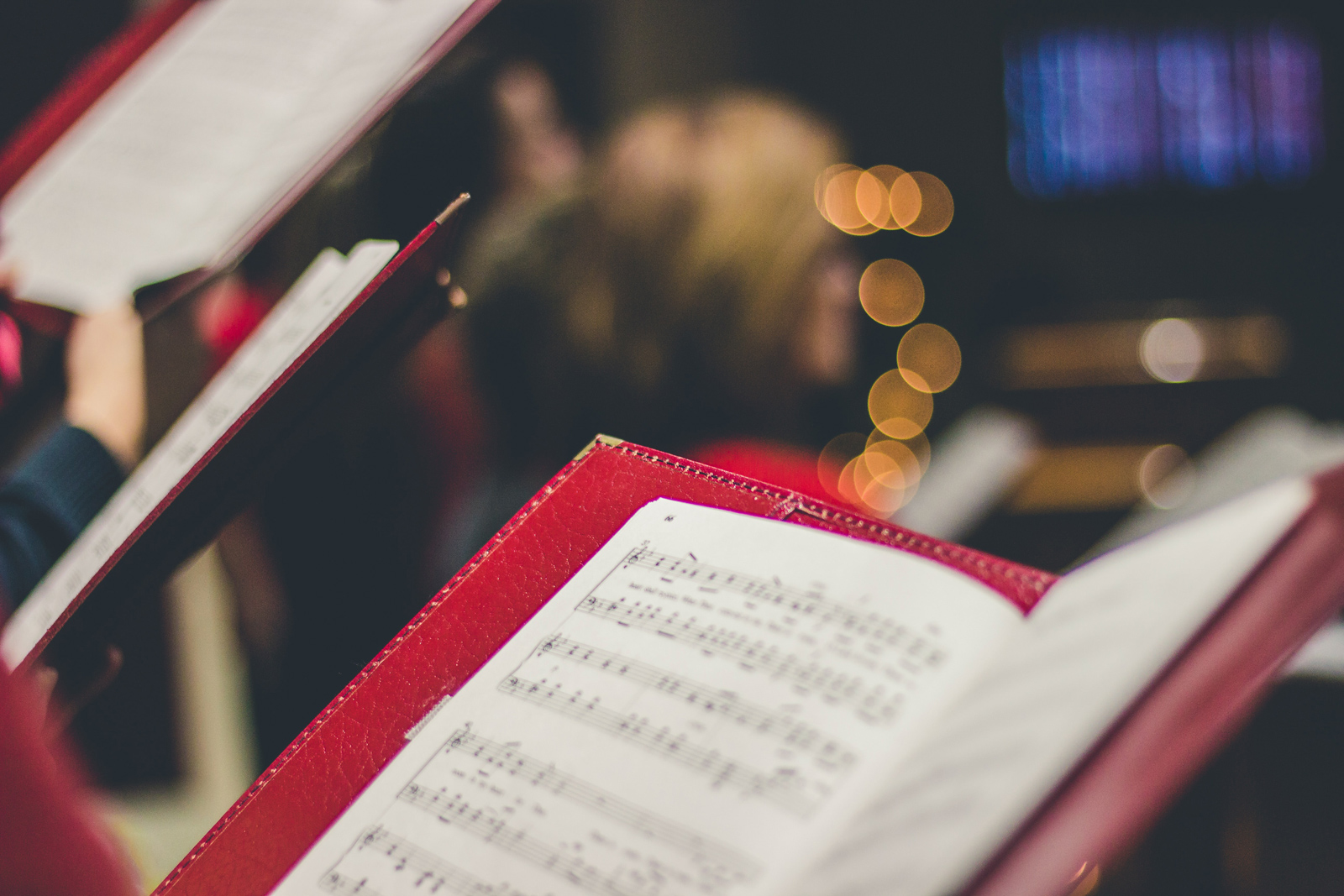 For Catholic Education Sunday this year on 12 September, ACCS is inviting students and staff of Catholic schools across Singapore to contribute recordings for a virtual choir, singing the recessional hymn of our live-streamed Mass.

To enable young children to participate, they only need to sing the AMEN, as demonstrated in this video.

Catholic Education Sunday has been celebrated since 2017, bringing together our Archdiocese’s educational community, forming 50,000-over students from nursery, pre-school and primary school to secondary school and junior college.

Despite Covid-19 restrictions, we can still find creative means to maintain our communal ties and worship together from our homes – the domestic church.

With this song, we want to bless all our Catholic schools, religious families, students and educators, as well as the Catholic Church in Singapore, especially in our 200th year.

Instructions on how to participate can be found here, with the four main choir parts: soprano, alto, tenor and bass. Current students are encouraged to wear their school uniforms while singing. Please upload your recordings by Saturday 4 September 2021, 11pm. Late submissions may not be used. 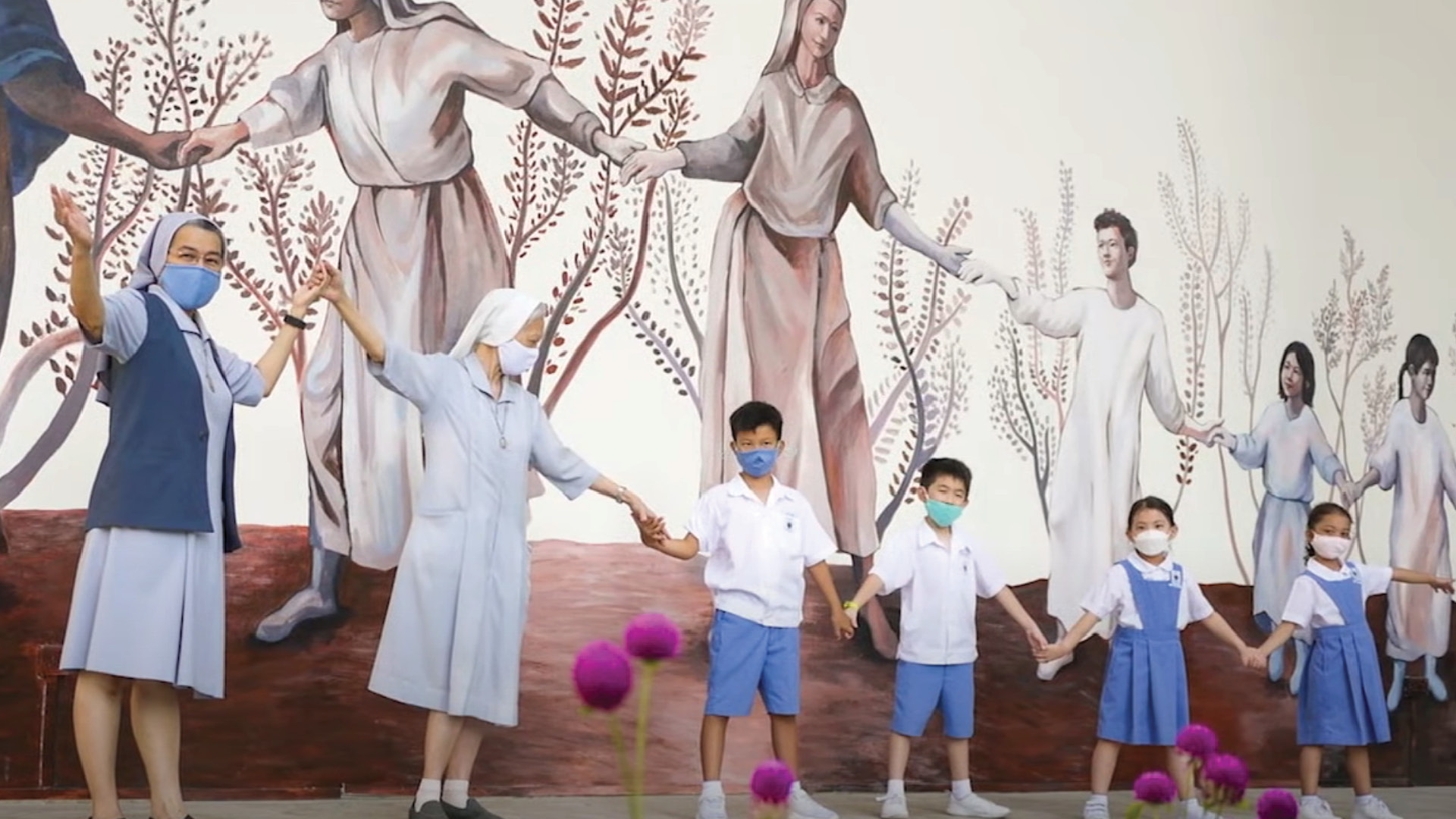 At the turn of the 19th century, when only the nobility and middle class had access to education, St Magdalene of Canossa, the daughter of a marquis and a countess, spent her inheritance providing free education for the poorest of the poor.

She witnessed widespread suffering and unrest in her hometown Verona, caused by the Napoleonic Wars. Magdalene reasoned that educated Christian wives and mothers were the best way to form wholesome families, creating a virtuous society. For her, the aim of education was to lead people to experience God’s love. 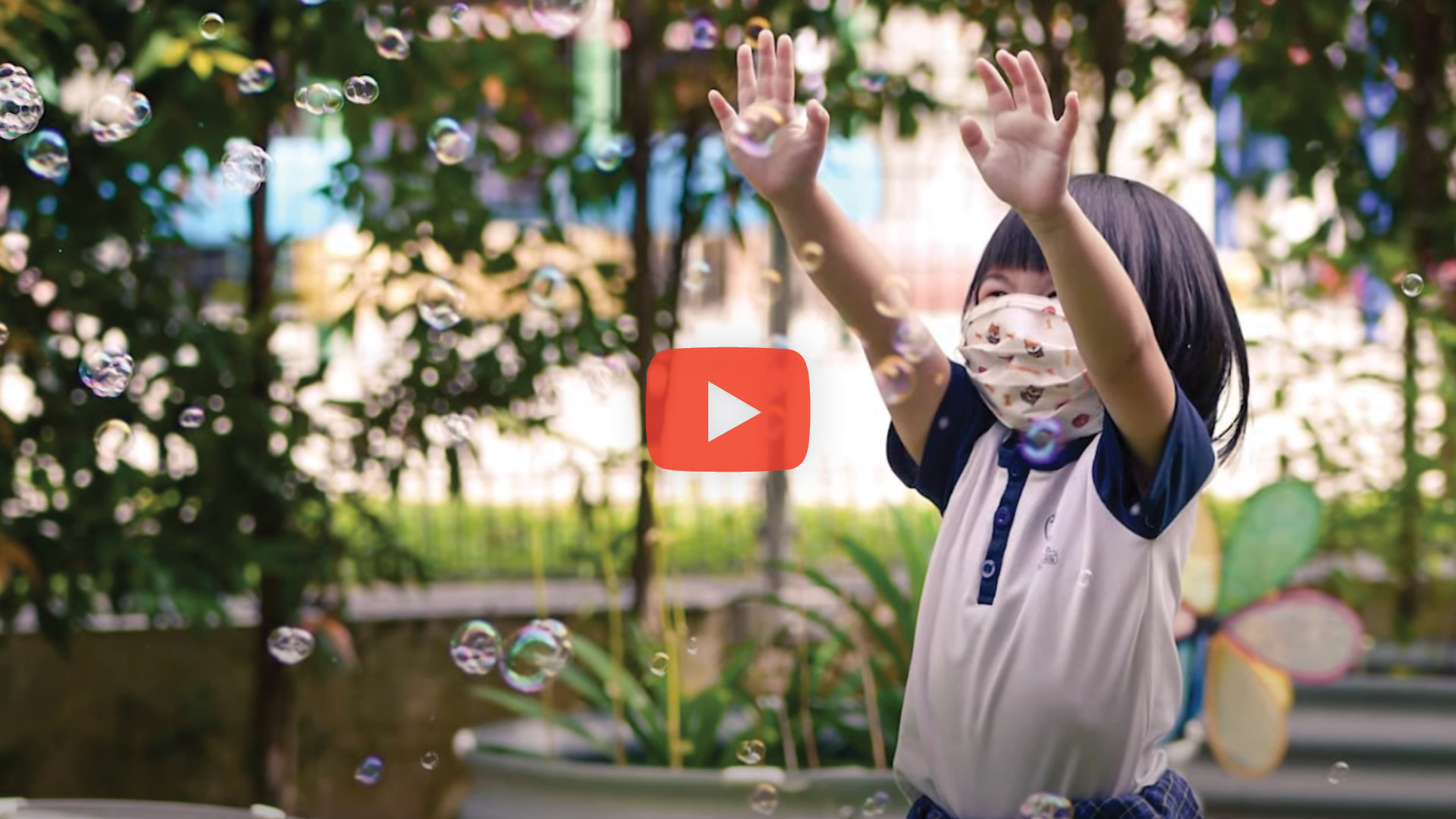 After surviving World War II and the Japanese Occupation, the Sisters established the Canossian School for the Deaf in 1956. That year, Sr Natalia Tasca FDCC gathered a group of six to work with her – this was the beginning of the Lay Canossians, who now number over a hundred.

Today, there are about 2,300 Canossians serving in 18 provinces on five continents. St Magdalene wrote that the Daughters of Charity are to be “detached from everything… and ready for the divine service and to go anywhere, even to the remotest Country.” Canossa Children and Community Services (Canossaville) continues the mission began by St Magdalene in Italy two centuries ago.

Learn more about what goes on behind the doors of the Canossian Village here: 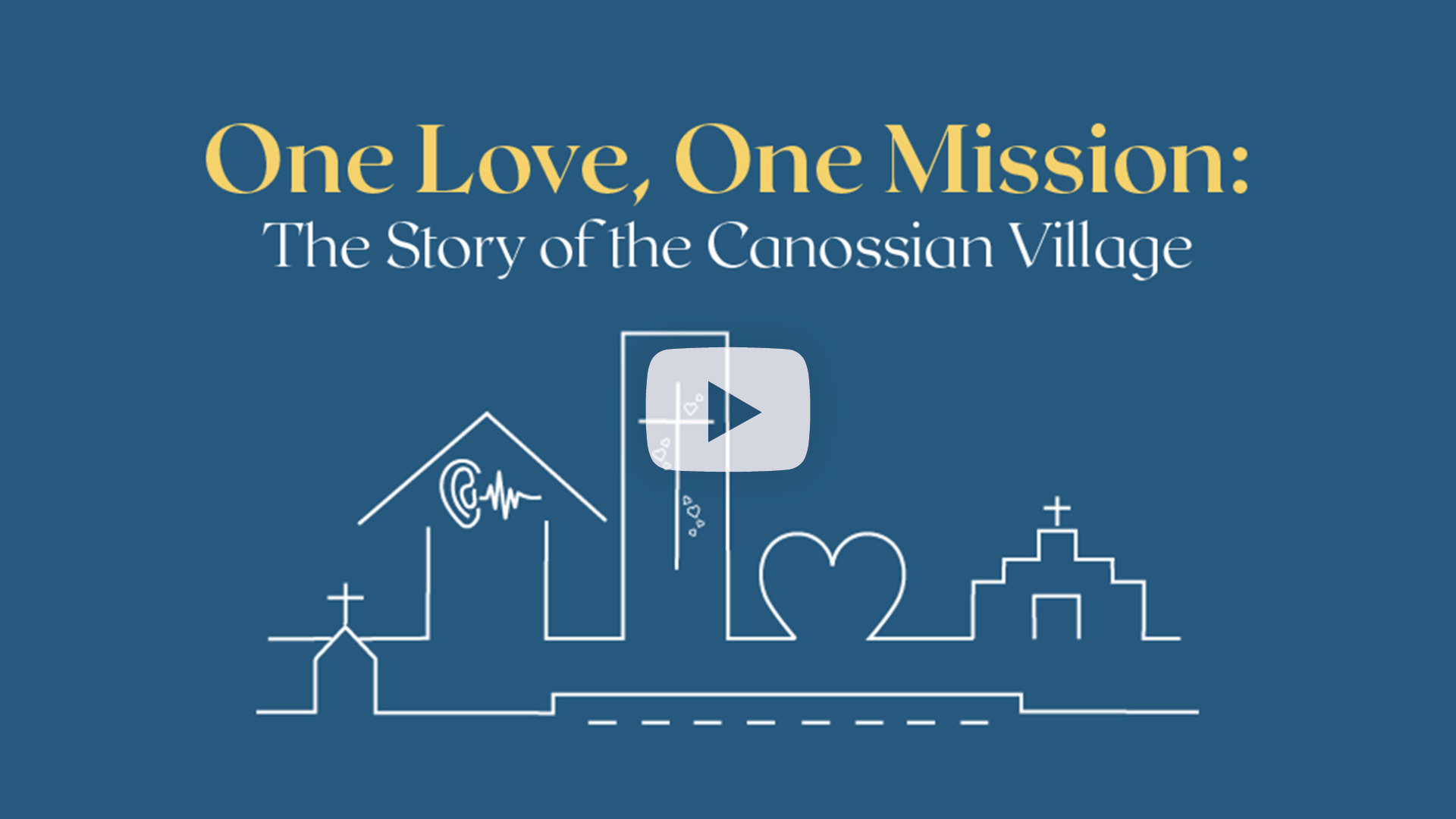 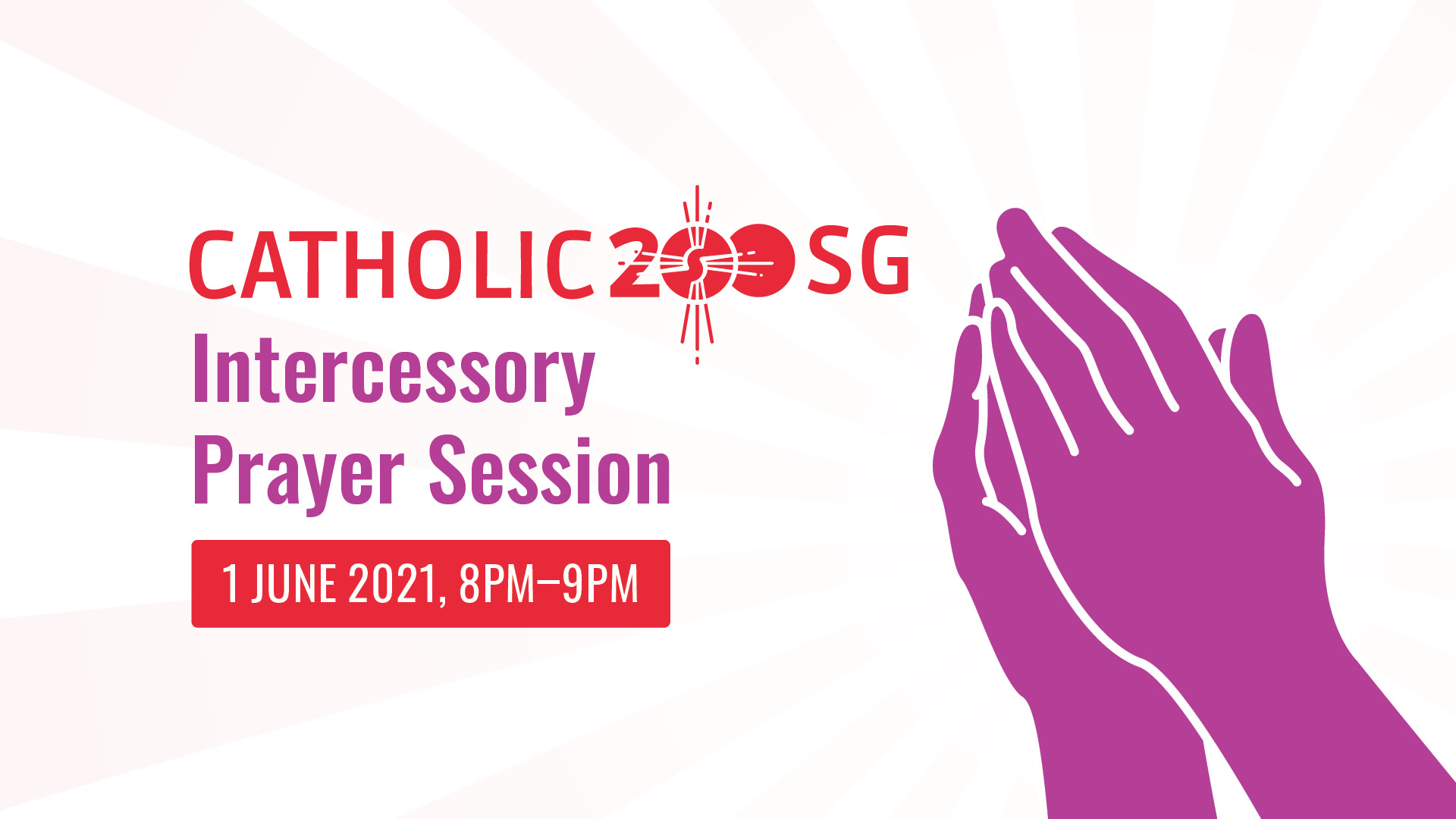 Start the June holidays the best way possible—in prayer! On Tuesday, 1 June, from 8pm to 9pm, the ACCS will be leading an intercessory prayer session on Zoom, in conjunction with Catholic200SG, celebrating two hundred years of Catholicism in Singapore.

After the opening hymn, Sister Cecily Pavri will give an introduction to the session. She will speak about the missionaries who founded our Catholic schools, heeding the call of the Gospel to make Christ known and loved. Sr Pavri will touch on how the original missionaries inspired locals to follow in their footsteps and continue the legacy of Catholic education. 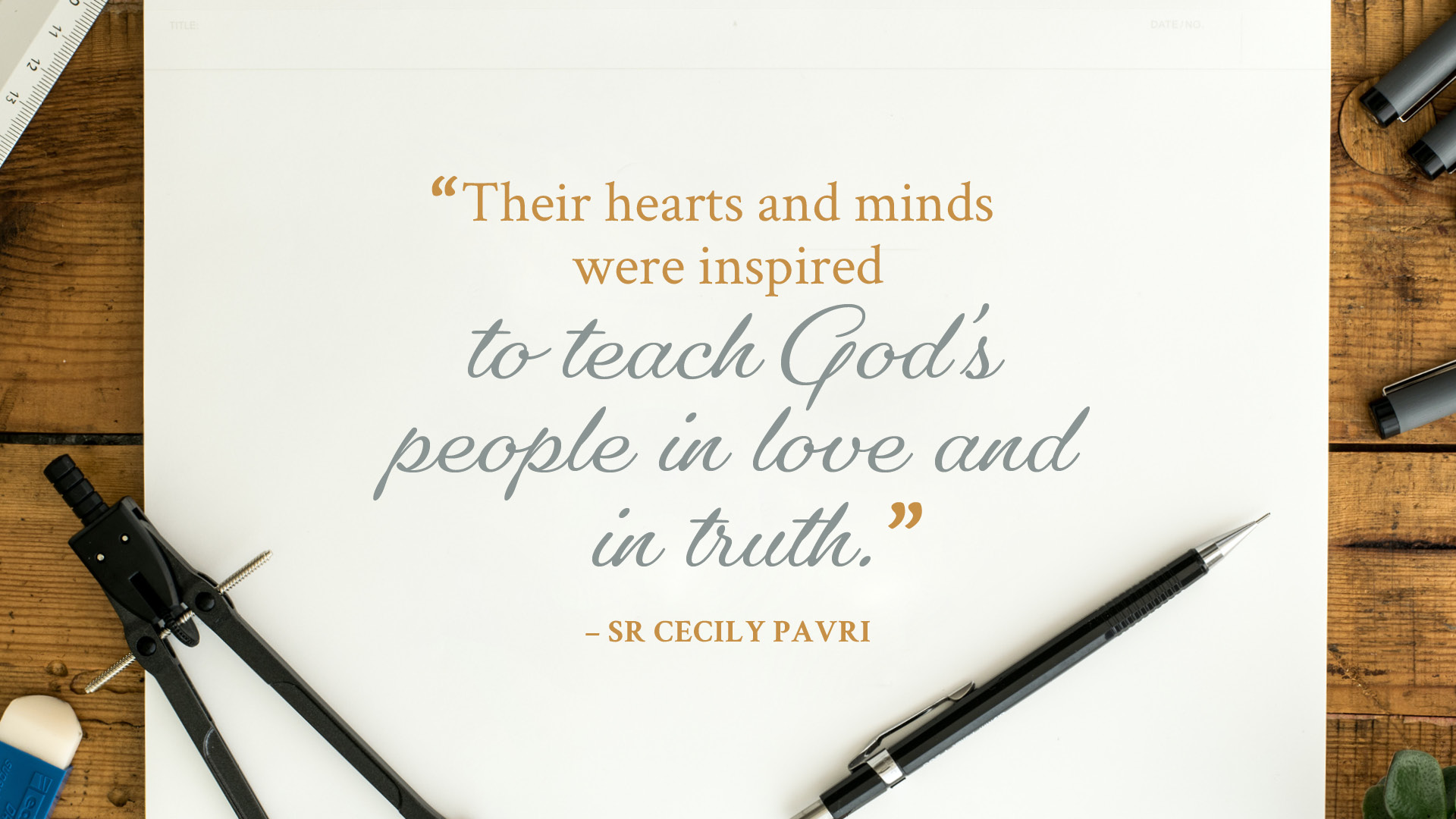 After Sr Pavri’s introduction, each religious congregation and their schools will give a short presentation, comprised of a scripture reading and quote from their founder, followed by prayers of the faithful. Together, the community will pray for our Catholic schools, school leaders, teachers, students, parents, sponsors, the Ministry of Education, the Catholic Church and our nation.

The session will also include hymns led by three teachers from St Stephen’s School.

Diocesan school representatives will close the session with a prayer to St Joseph and the Catholic200SG prayer. This will be followed by the final blessing and a closing hymn.

As we celebrate Catholic200SG, we invite parents, educators, and students to join us in prayer, giving thanks for the gift of Catholic Education, a legacy left for us by the early missionaries. Log in with the following details (please note that there is a 1,000-seat capacity for the Zoom event): 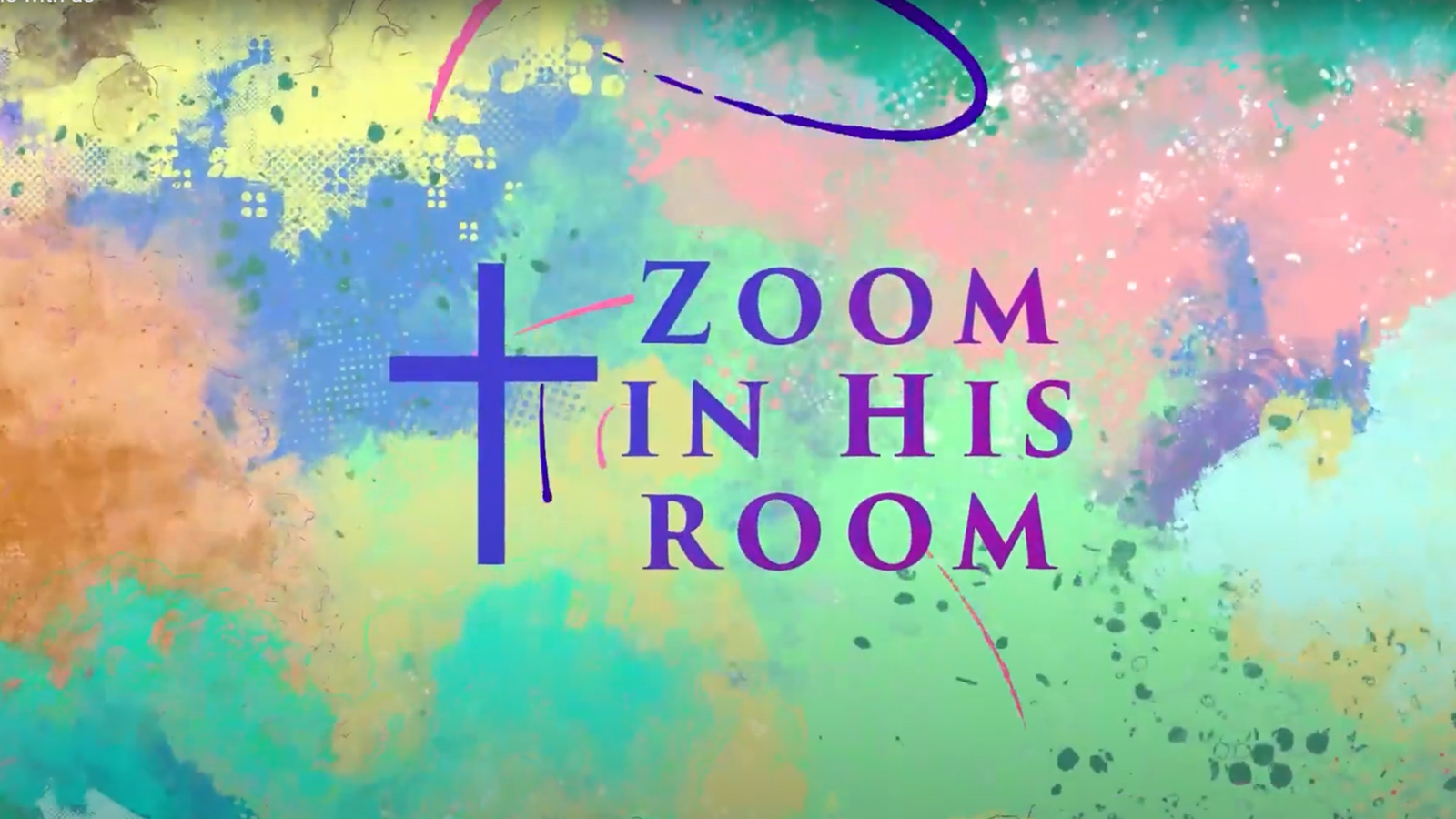 “Zoom in His Room” Keeping Students Connected to Christ During HBL

Saint Max, the video production arm of the Archdiocese Communications Office, is producing a series of short videos meant for Catholic schools and parents to use freely in this season of Home-Based Learning (HBL). Particularly suitable for primary school students, these videos aim to inspire a focus on God as the children began each new day preparing for lessons at home.

Beginning with a song of praise, each episode contains a reflection on the day’s scripture readings or feast, with suggestions on how to incarnate spiritual truths through acts of love. The videos conclude with prayer intentions for the community and Spiritual Communion.

Each episode will be released at 7am every alternate weekday morning, beginning this morning. The five episodes will cover topics like God’s promises in times of uncertainty and fear, the work of the Holy Spirit in our lives, living the Christian life, and faith that moves mountains. The schedule is as follows: 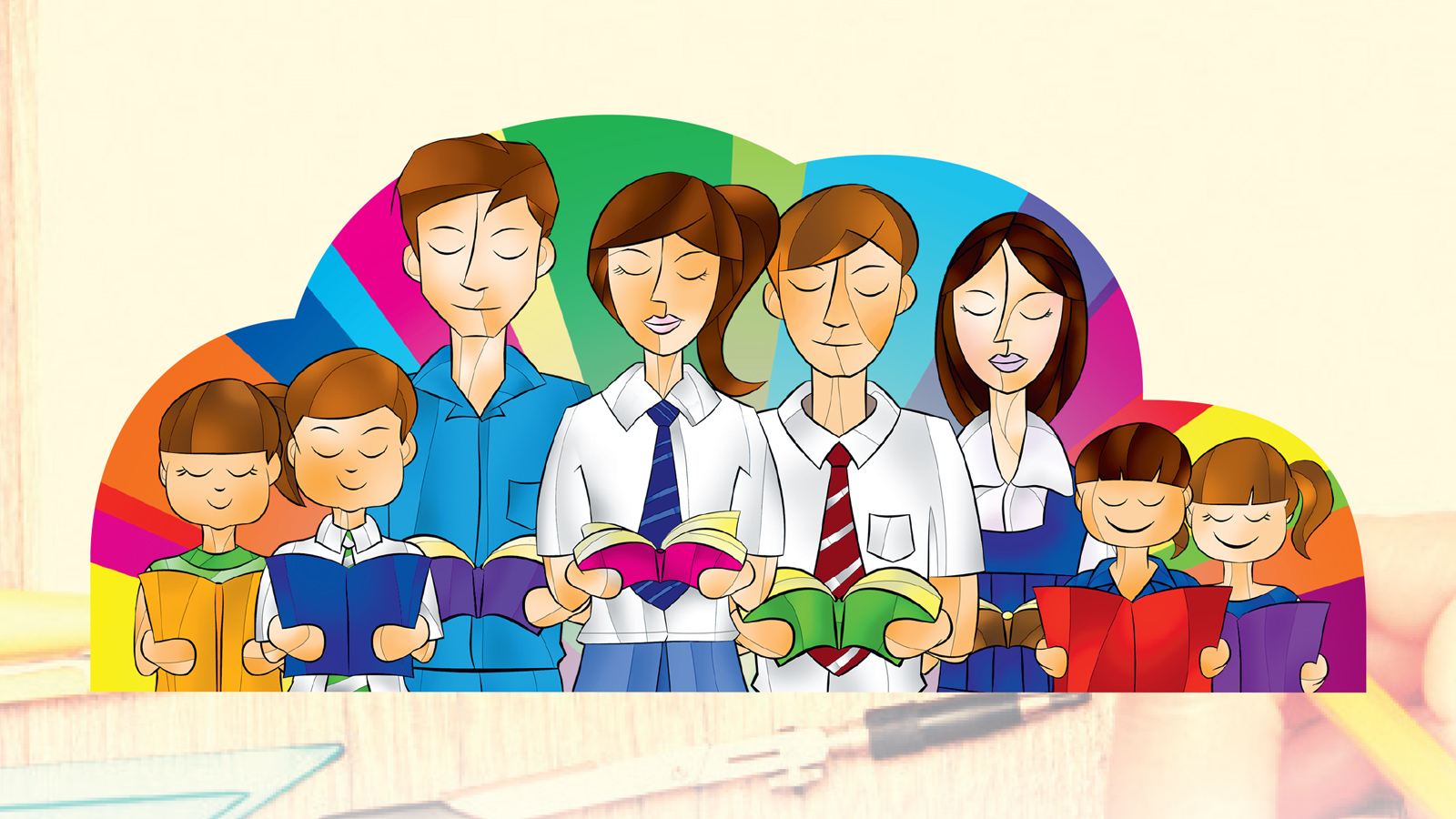 Archbishop’s Prayer for Our Catholic Schools 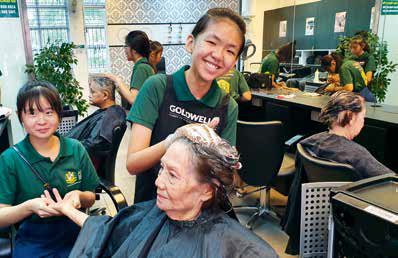 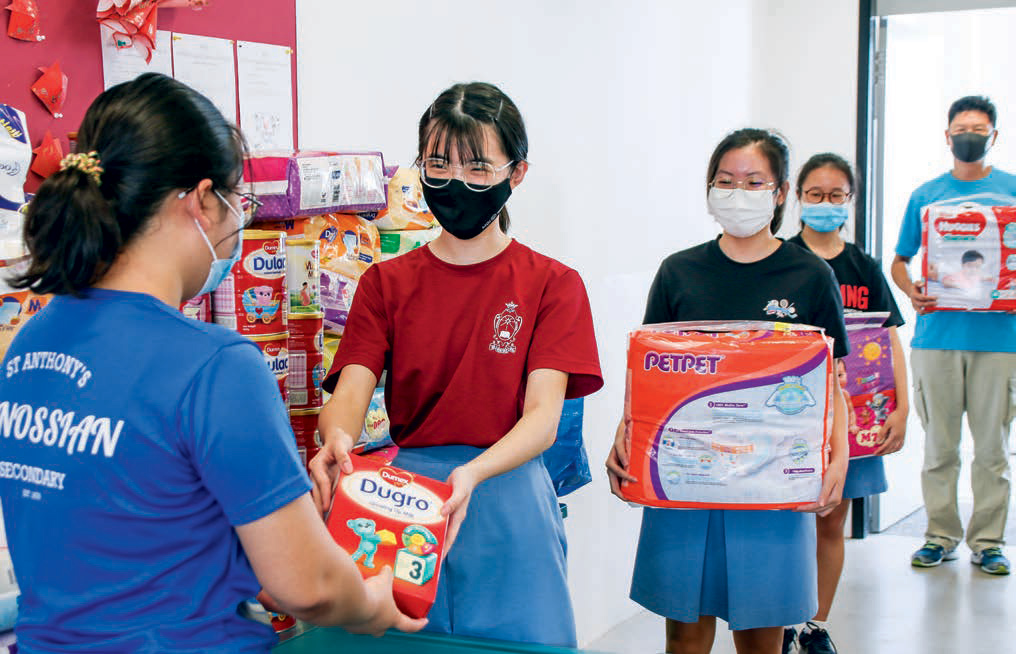