Barely two months after assuming her Administration Manager (AM) post, Ms Lyndia Lin took the opportunity to attend AM/OM Recollection and Learning Journey on 5 June together with nine other AM/ Operations Manager (OM) from six different Catholic schools.

She appreciated how the event could gather AMs/OMs from Catholic schools together to share their challenges and the love of their job. According to Ms Lin, they realized, through these sharings, that most of the problems they face in their daily work were similar. They eventually learned from others’ mistakes and share experiences.

Mr Gordon See, on the other hand, had been attending every single AM/OM Gathering organized by ACCS in the past five years. As OM of the only Catholic JC in Singapore, he felt that the school has to set a good example for other Catholic schools to support ACCS’ initiatives in strengthening the network of Catholic schools.

Reflection on the role of AM/OM as culture builders
Fr Edward Seah, ACCS Exec Director, briefly talked about how Catholic schools provide holistic education focusing not only on academics excellence but also moral and spiritual development of the young people. He later gave an overview of the Catholic education system in Singapore and how ACCS is supporting the schools in their Catholic ethos.

Retired school leader Mrs Mathews Shu Quo then led the participants into discovering the reason why they are sticking to their current roles as AM/OM. The open discussion revealed two common reasons: 1) love for children and 2) warm and caring environment in Catholic schools. 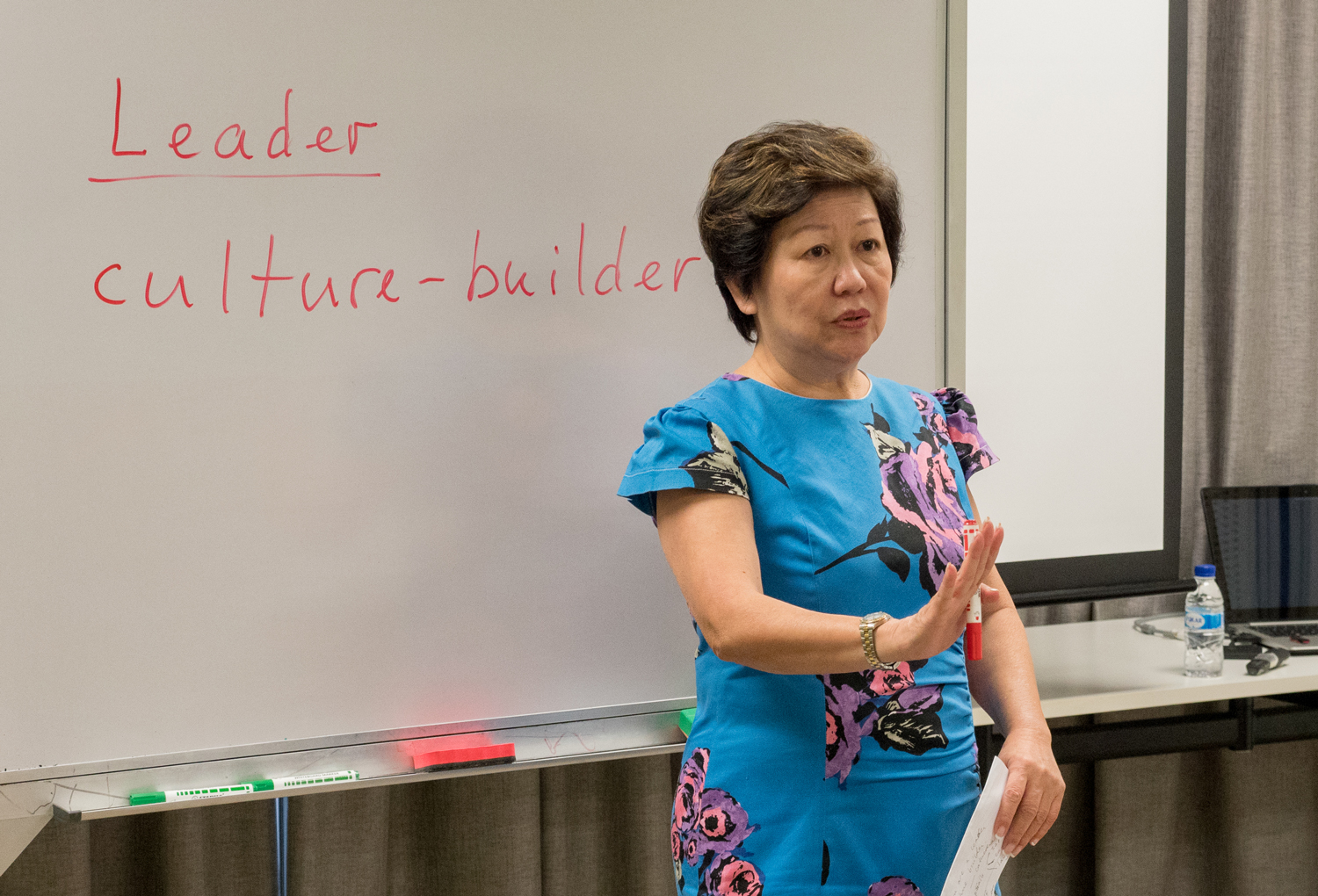 They were urged to be conscious of their role as culture builder in the schools. Inherent to the position of AM/OM is the supervision of other school staff (e.g. OSO, CSO) or vendors (security officers). Such responsibility can be used to influence the kind of working environment they are in daily, especially at the General Office. The participants could create a friendly workplace which staff or vendors would enjoy. School visitors would also benefit from a welcoming school environment.

Mrs Mathews presented three key strategies to achieving this culture: 1) making the staff/vendors understand the importance of their contribution (Cathedral builders vs brick layers), 2) acknowledging the dignity of each person, and 3) minding language use (e.g do your words unify or divide people?).

Catholic heritage tour at Bras Basah
CANA facilitators (Joan Pillay and Christina Ying) led us to a Catholic Heritage tour at Bras Basah area. First stop was the site of the first Catholic school in Singapore, St Joseph’s Institution, where the Singapore Art Museum is currently located. By the invitation of Fr Jean-Marie Beurel, a few La Salle Brothers from Europe came to set-up a Catholic school.

The participants crossed Bras Basah Road to reach the oldest surviving Catholic Church in the country, the Cathedral of the Good Shepherd. The participants learn that the name of the church was derived from the words of St Laurent Imbert “The Good Shepherd lays down His Life for His Sheep” before he was martyred to save the life of his people. St Imbert was believed to be the first priest to visit Singapore.

The group then headed to the food and entertainment complex CHIJMES which was once a former Convent of the Holy Infant Jesus (CHIJ) school and living quarters of the IJ nuns. One of the things pointed out by the CANA facilitators was that people from other faith background helped build CHIJMES, indicating a good relationship of the Catholic Church with them.

The last stop was Church of Saints Peter & Paul whose history is closely linked to the growth of the Chinese Catholic community in Singapore. Restoration works were completed last year with the instalment of a high altar as one of the improvements done.

Tour at St Joseph’s Institution
After two years of renovations, SJI moved back to its Malcolm campus in January this year. Ms Eliza Lim, Corporate Communications Manager, graciously took the group for a tour in the newly renovated campus with additional facilities that include an indoor sports hall, lecture theatre and classroom block to accommodate more students.

After the tour, Mr Frankie Ng, who is in charge of the school’s Facilities, shared with the group some of the issues and challenges they have encountered upon moving back to their campus. 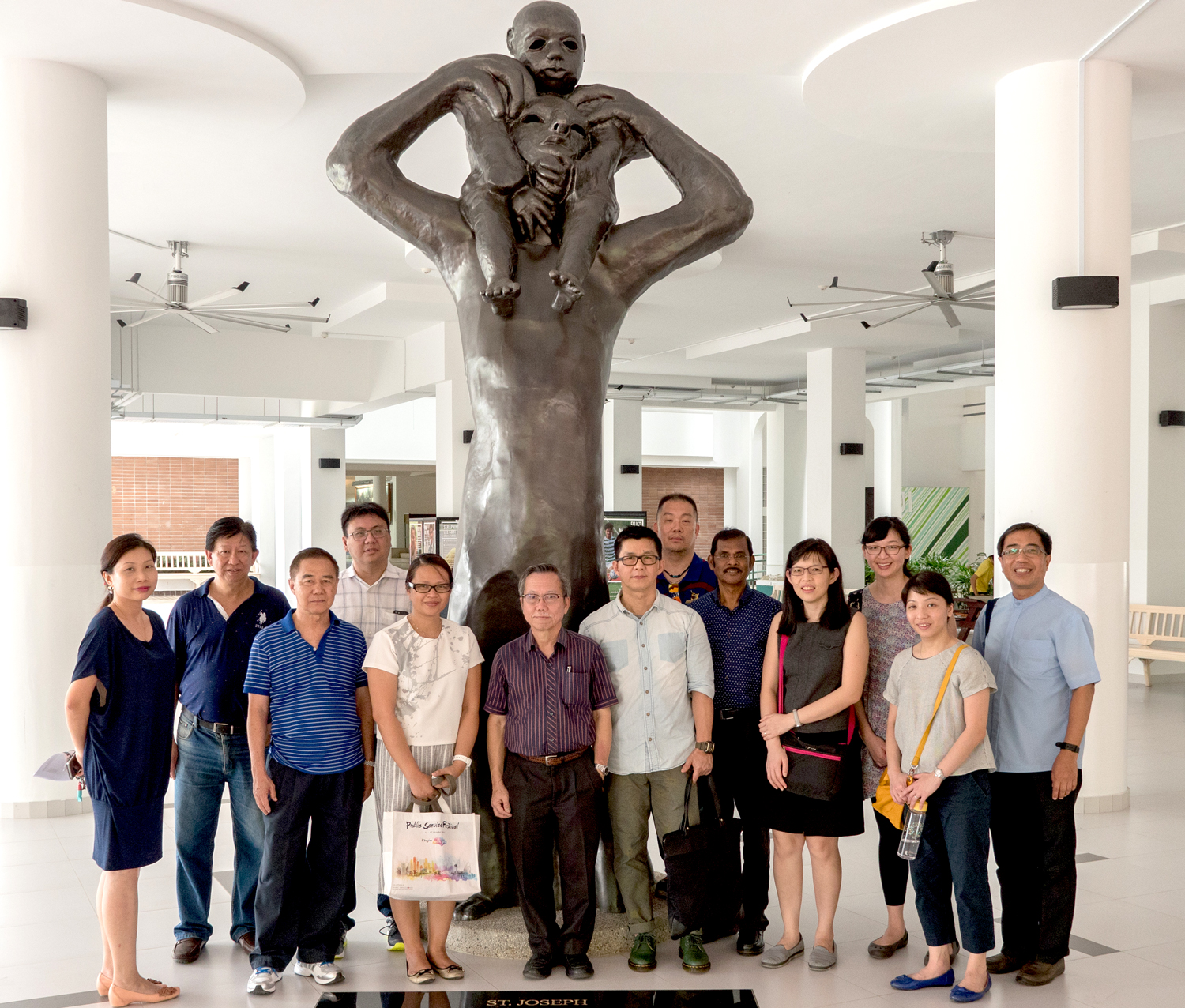